Blue Is The Color 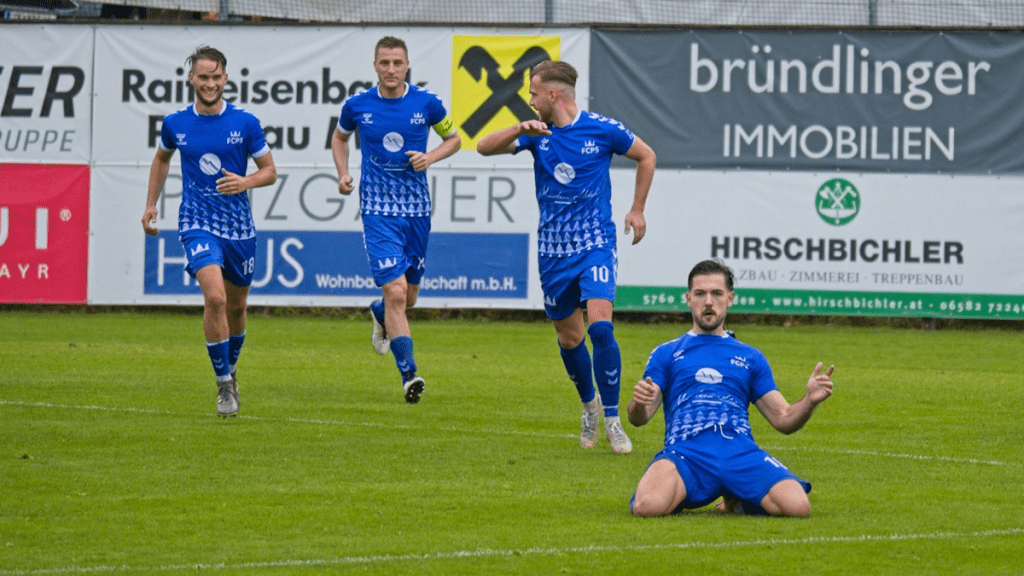 In the run-up, FC Pinzgau Saalfelden was dubbed a “pile of broken pieces” in the preview of SV Austria Salzburg, now exactly these broken pieces should bring luck to the home side and become the bitter doom of the guests from the provincial capital. An irony of history!

In difficult ground conditions, an attractive and fast-paced game developed from the start. FC Pinzgau Saalfelden did not hide against the leader, who was to be favored, but tried to set accents quickly. However, a shot by Philipp Zehentmayr and two chances by Semir Gvozdjar remained unused in the early stages. It took until the 16th minute before Austria Salzburg had their first chance: After a long ball, Kilian Schröcker blocked Marco Hödl’s close-range header against the bar – but that was to remain the visitors’ only good chance at first. The home side put in an enormous effort, showed a strong run and won many important duels. Towards the end of the first half, Tamas Tandari missed the corner of the net by just a few millimeters with a shot from an acute angle, before Lukas Moosmann also just missed the target with a powerful shot from 25 meters.

In the second half, Austria Salzburg stepped up a gear and took command. A header and two spectacular saves by Kilian Schröcker in the Pinzgau goal were the logical consequence. Markus Fürstaller’s team, however, continued to be poisonous and always dangerous with targeted pinpricks. In the 65th minute, Gvozdjar was the quickest in the penalty area and scored with a well-considered finish into the far corner for a 1-0 lead. In the final phase, Salzburg Austria once again threw everything forward and failed again in injury time on the bar. In the end, FC Pinzgau Saalfelden held on to the narrow lead and celebrated the third win in the third game under interim coach Markus Fürstaller. After BSK 1933, they again prevailed against a league leader of the Salzburg Regionalliga within two weeks and once again remained without conceding a goal.

“We found very well into the game and did our thing really well. In the second half, Austria Salzburg was very present and pressed for the equalizer. Then we saved ourselves with fight and passion over the finish line. It was a great fight and in the end my team deserved to win at home. We want to take the momentum with us!”, Markus Fürstaller draws a first conclusion immediately after the game.