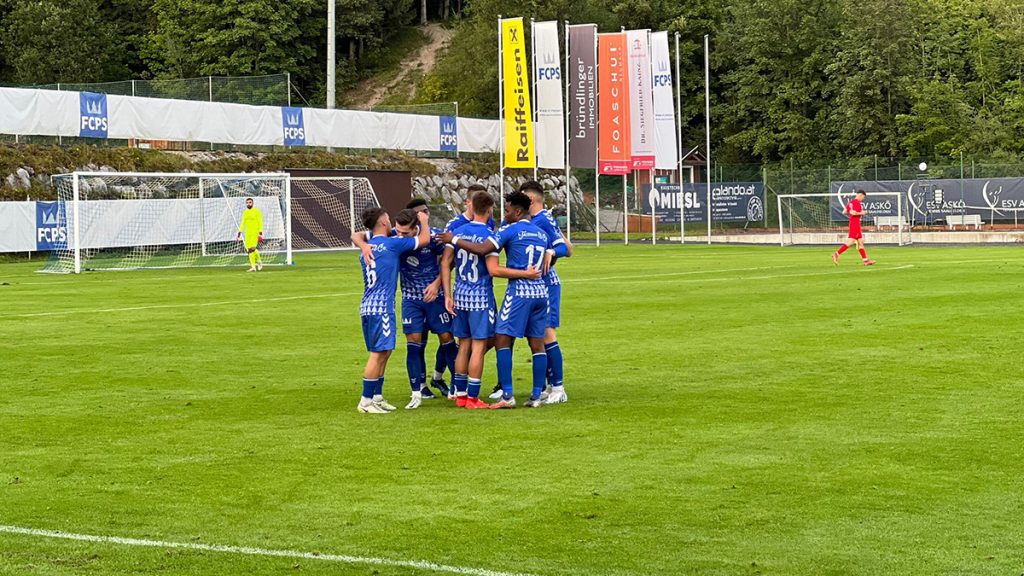 FC Pinzgau Saalfelden outclassed SV Grödig at home in the 1508 SaalfeldenArena and recorded their highest win of the season to date. Two doubles and a free-kick ace secure three points, a savvy defense again secures the clean sheet.
After just a few seconds, there was already a small moment of concern, as there had been an unfortunate collision between Felix Adjei and one of his teammates – but the defender was able to continue after a short treatment. No sooner had he shaken himself off than he was allowed to set off for the collective goal celebration: After a throw-in at the level of his own penalty area, the ball reached Tamas Tandari with only two passes, who was able to run towards the opponent’s goal relatively unchallenged and finished textbook into the far corner.
Lukas Moosmann had the chance to make it 2:0 just moments later, but the ball ultimately went over the crossbar by several centimeters. In the twelfth minute, a first sign of life of the guests, but too many defending legs blocked the way to the goal of Kilian Schröcker.
After some calm had returned in the middle part, the game picked up again towards the end of the first period. Ousainou Surr, on the side of Thomas Schnöll’s team, with a long shot and FCPS striker Gabriel from close range after a corner kick each had the chance to influence the score before the change of ends, but missed them. Thus Semir Gvozdjar took up the cause and increased after small coordination problems of the Flachgauer defense row straightforward with a full shot from inside the box to 2:0. Seconds before the break, yet another goal as Tandari stepped up to the penalty spot and scored dryly after Grödig goalkeeper Stipo Colic.

The second half got off to a promising start when David Rathgeb got hold of the ball after a failed clearance and fired in a shot that Colic had to do everything in his power to keep out. However, he was powerless to stop Gabriel’s subsequent free-kick and saw the ball sail past him to make it 4:0. Two minutes later, Gvozdjar took advantage of the moment and scored his second goal of the day after casually rounding the Grödig keeper and easily slotting it in to make it 5:0.

Moments after the hour mark, things got ugly for a moment when Grödig midfielder Patrick Schober unpacked his scythe near the center of the pitch and pulled through. The only logical consequence: sending off!
As if the Schnöll troops were not already punished enough with the score, they now also weakened themselves unnecessarily. The home side, on the other hand, did what they did best, namely continue to play forward. Apart from a few half-chances, however, nothing more countable came out of it. In the end, a strong 50 minutes were enough to clinch another home victory and FCPS coach Alexander Schriebl should be particularly pleased: zero goals against and zero in the loss column.

Alexander Schriebl summarizes the match: “We played today against an opponent who has put on the game very emotional. It was tough, often the duels were overly hard, but we always found a good answer today. We were well prepared for the game, from that we were able to take it easier on the pitch. My team played a great game, scored beautiful goals and acted really smart over 90 minutes.”