FCPS survive in Salzburg for important away win 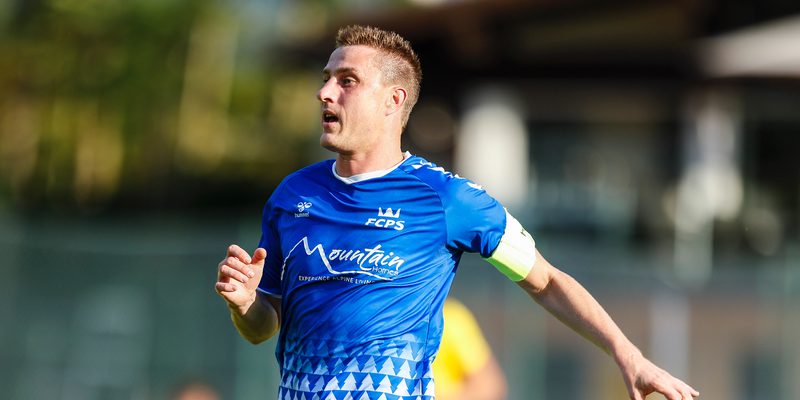 Petrit Nika scored with 15 minutes remaining as Salzburger AK 1914 pressed and pressed for a draw, but heroic defending and fantastic saves from Kilian Schröcker secured all the points for FCPS and leapfrogged the Mountainous Pine Blues into the top three of the Regionalliga Salzburg.

The fixture in the shadow of the Hohensalzburg Fortress almost began in the worst possible manner for the Ziege Crew, as the home side broke the defensive ranks within 12 seconds and forced a spectacular diving save from Schröcker. As the match found a rhythm, FCPS became stronger, dictating the game to SAK and forcing their opponents in their own half.

This pressure saw the first real opportunities with Schwaighofer’s drilled shot saved, before Lukas Moosmann hit the bar with a shot from distance and Christopher Fürstaller missed a wonderful opportunity from close range.

The deadlock was broken after 28 minutes after an ideal cross from Felix Adjei found Schwaighofer in the right place at the far post and pushed the ball over the line for the lead. After another great chance by Joao Pedro who missed when one-on-one with the goalkeeper, it was Schröcker again who kept the score level with a great reflex save.

Shortly before the break, it was 2-0 with captain Tandari doubling the Pinzgau lead after latching into Schwaighofer’s beautiful ball in the box. The goal was Tandari’s 149th strike for the Ziege Crew, only one goal from his landmark 150th.

In the second half, the Pinzgauers quickly took command again and once more hit the woodwork through Joao Pedro, who saw his corner evade the bodies in the box and strike the foot of the post. A few minutes later, the Nonntalers threatened the goal once again and hit the crossbar via the dangerous Petrit.

With only 15 minutes remaining on the clock Petrit reduced the score to 2-1 after a perfect cross-field pass, with Christian Ziege’s men surviving the final minutes with a bevy of excellent defensive blocks and big saves from Schröcker – but they held on for a vital three points and an important victory.

“In the first half we were able to continue our performance from the Anif game, we created good chances and had the game under control. The 2-0 lead was also more than deserved. After the break we lost our rhythm a little bit, we were still superior but left more space for the opponent. When we scored the second goal, it was really important for the team. I’m glad that we held out and got the win. It’s an important three points that we’re happy to have secured,” said Christian Ziege.