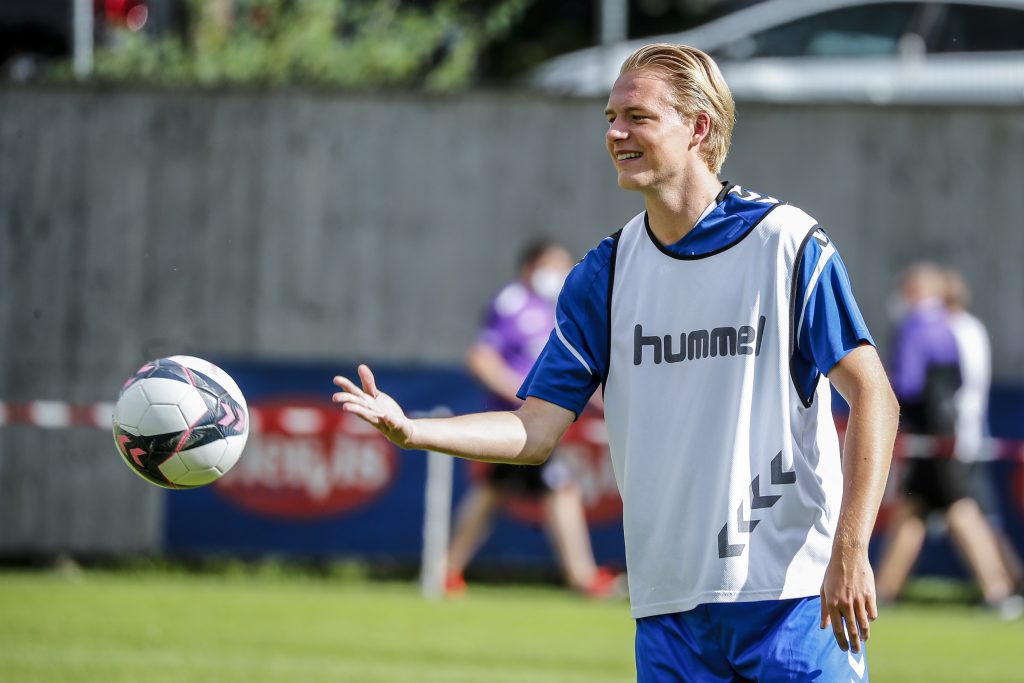 Niklas Seiler’s path was mapped out from an early age, with football more or less a birth right for the Pinzgau native. His father Franz, who also coached FC Pinzgau Saalfelden after spells managing various clubs, challenged and supported his young son, and was one of his first coaches at his local club in Piesendorf. “I have a very positive relationship with my dad. He has amassed a lot of experience in his career as a player and a coach, so his feedback is welcome. Without him, I wouldn’t have become the player I am today. He has been a loyal companion and a great advisor since I was little. Nothing better could have happened to me than having him coaching me as a young player,” said Seiler – who is considered to be a helpful, thoughtful and spontaneous person – as he reflected enthusiastically on his relationship with his father.

At the age of almost 10, Seiler went off to Salzburg to join the Red Bull Football Academy. The midfielder quickly established himself as a regular and was made a captain, a role which saw him assume a lot of responsibility in the years that followed. But after a change of coach at U15 level, Seiler was dropped to the bench – a situation he did not deal with well at the time. “Despite my good performances, I was not picked. I found that difficult to cope with. We decided that a change was needed. I was not used to not playing. There were a few options, but we decided on Grödig because at the time some friends of mine were playing there and I just wanted to enjoy my football again. The advantage was that I didn’t have to change schools and could train with a team that was competing for promotion to the second division. In hindsight, maybe a different decision would’ve been better. But you never know how it would’ve turned out if I’d taken another path,” the 21-year-old said. After three years at the foot of the Untersberg mountain, he moved to SV Wals-Grünau, where he was given his first taste of the Regional League.

“I want to get fit and stay that way”

Seiler has been back in Pinzgau for some time and is lacing his boots for FCPS. He is considered to be a “difference-maker”, but has not really been able to demonstrate that consistently on the pitch yet. “My biggest goal is to stay fit throughout the preparation period and to start the second half of the season injury-free – I haven’t done that for a long time. I’ve had to deal with injuries time and again, so I’ve hardly been able to find my rhythm. Obviously, you cannot fulfil your full potential in that case. It is only by playing that you get better and build up the fitness you need for 90 minutes. I want to stay healthy and get really fit – that’s what counts first and foremost. Only then can I bring value to the team, that’s my objective. Then my self-confidence will return and I’ll have more of a presence on the pitch,” said Seiler as he summarised his short-term goals.

But the talents of Seiler, who likes to relax by taking walks and listening to music, extend beyond the football pitch. He has had a huge interest in fashion for years and at the end of 2020, after several years of preparation, the Pinzgau native founded his own fashion brand, “December Heart”. “The idea had been there for a while. I want to inspire people and make them think; that’s important to me. Four years ago, I had no idea how to do that; it was more of a pipe dream. One day, I bought a programme and just started designing. Only a few people knew about it; it was very important for me to get everything ready first and then talk about it – which I ultimately managed. That’s why some people were all the more surprised at the end,” said a smiling Seiler, who subsequently signed up for an online degree in fashion management but later dropped out. The name of his fashion brand, which is supposed to stick in people’s minds, is a snippet from a song title that he discovered by chance.

The 21-year-old has since plotted an alternative career path and signed up for a degree in nursing, which will begin in the autumn of 2022. “I already liked working in the old people’s home during my civil service – it’s just my kind of thing. Helping people and making them happy is one of the most beautiful things you can do and is very fulfilling. My first collection was also inspired by this period in my life. ‘Give not take’, as the name of the collection suggests, is meant to inspire people and show them that it makes you happier to help and give rather than always taking. I want my education to be my foundation and I want to grow my fashion brand alongside it. I am very confident that I will succeed in doing so,” said the Pinzgau native, who was assisted by a friend during the first photo shoots. For the first video clip, FC Pinzgau Saalfelden assistant coach Mike Pilko gave him a helping hand.

“I am very happy at the moment and will try to improve and develop in all areas. Hopefully, I will be raring to go again in the spring,” concluded a motivated Seiler.