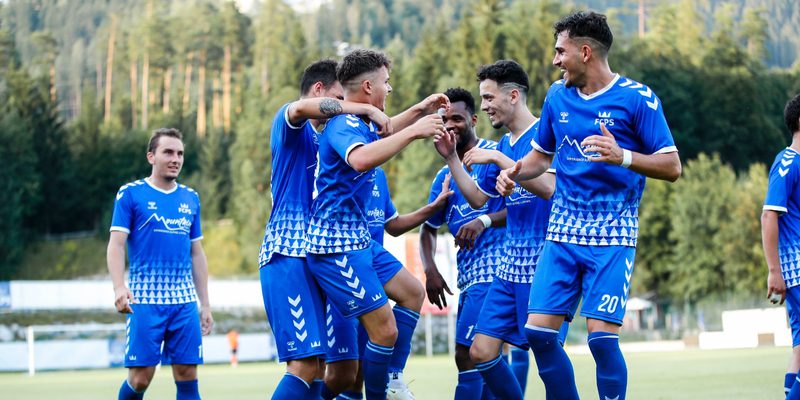 The Salzburg Regional League throws up many unexpected results on a weekly basis, so it’s hardly surprising that the gaps in the table are narrow and the teams are tightly packed together. Next up for the Ziege Crew is an important home game against SV Seekirchen – who suffered a narrow 1-0 defeat at the hands of SV Wals-Grünau last time out – this Tuesday evening. The Mountainous Pine Blues will be targeting a third home win in as many matches as they look to cement their place in the upper echelons of the table.

PERSONNEL SITUATION
Christian Ziege is still without the two long-term injury absentees Denis Kahrimanovic (cruciate ligament) and Semir Gvozdjar (adductors). However, Felix Adjei will return to the squad after serving his suspension. Niklas Seiler has recently resumed team training as well. A late call will be made as to whether he is ready to make an appearance against Seekirchen.

STATEMENT
Christian Ziege: “The league is very even at the moment and there are six teams that are separated by only two points in the table. We have an exciting week ahead of us with two important matches. There are currently no favourites; the cards get reshuffled for every game and a lot of it depends on the performances on the day. We want to defend our immaculate record at the Saalfelden Arena against Seekirchen and add to our points total. We’re within touching distance of the summit, and we want that to still be the case after our next two games.”

THE NEW MOBILE STAND
The Saalfelden Arena welcomed a new signing last Friday: an additional mobile stand, which will provide covered seating for a further 120 people, was set up directly next to the main stand (299 seats). The current plan is for the mobile solution to stay in place until the end of the fall season.

WOMEN’S DAY
All female visitors to FC Pinzgau Saalfelden’s upcoming home game against SV Seekirchen will be given a champagne voucher upon entry to the stadium. The voucher can be redeemed in the Mountain Hotels Business Club after the final whistle.