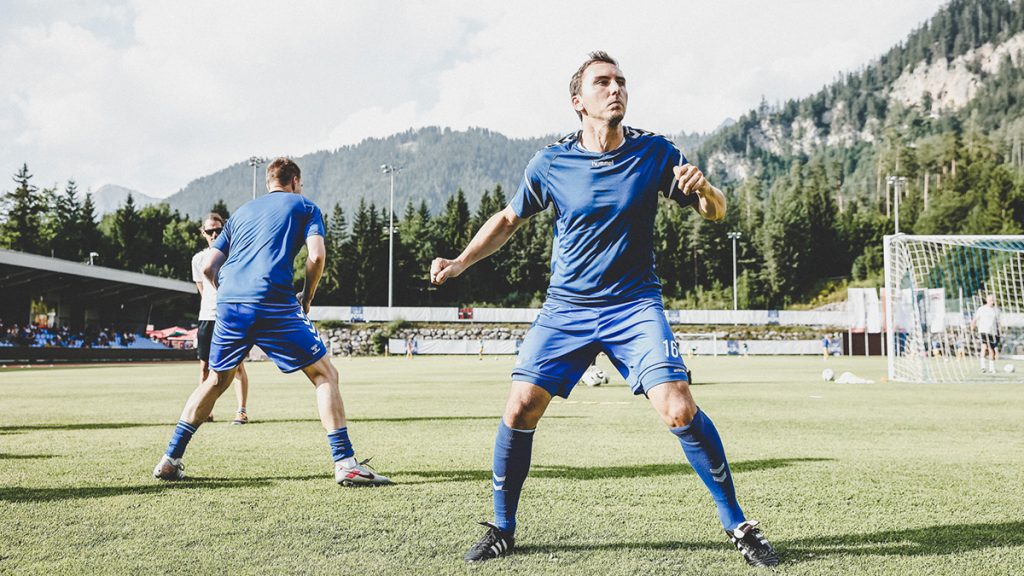 A keen footballer since his early childhood years, Niklas Mühlbacher’s ambitious attitude has helped him become not only a regular starter – but a club legend with more than 250 appearances for the FC Pinzgau Saalfelden first team too. “I can no longer remember exactly how I started out. But I know there’s a photo of me where I was training with the U8s/U9s at the age of two and a half, even though the shorts were much too big for me. My entire circle of friends played football and I practically grew up with a ball at my feet,” said Mühlbacher, recalling his roots. With the exception of a one-year spell in Leogang, the 28-year-old has been playing for our club since he was 15 and FC Pinzgau Saalfelden feels like family to him.

“Even though we weren’t so successful in sporting terms and were battling against relegation, it’s always been super within the team. I get on particularly well with Fatsch (David Rathgeb) and Tandi (captain Tamas Tandari), whom I’ve known half my life. We’ve become good friends both on and off the pitch and have hobbies in common too. This harmony is probably one of the main reasons why all three of us have been with the club for so long,” the defender explained. Mühlbacher has already experienced many things at FCPS: some bitter defeats, but some emotional highs too.

Huge progress thanks to Christian Ziege

The Tyrolean, who jokingly refers to himself as “the token Tyrolean at FC Pinzgau Saalfelden”, sees the arrival of American investors at the club in the summer of 2019 as extremely positive. “If the club suddenly has ambitions to play in a higher division because of these additional financial resources, that is of course very appealing. But just the fact that you can play with players like Pablo Ruiz or Andrew Brody, who have joined us from the first and second American leagues and are now playing a defining role in Major League Soccer, is a great experience. Not only on a footballing level, but also with regard to different cultures and mentalities,” revealed Mühlbacher, adding: “But the biggest benefit to me so far has been our coach Christian Ziege. As a former Germany international who played in Germany, England and Italy, he demands more than other coaches – but that constantly pushes you to get better. I’m not the youngest anymore, but thanks to him I’ve made a lot of progress in my development over the last year and a half,” said the Tyrolean, who appreciates working in an environment that is now more professional than it used to be.

At the age of 18, Mühlbacher could not have imagined becoming a physiotherapist at all. He began to study sports science at the University of Salzburg, where he came into contact with a branch of study that included physiotherapy. He subsequently developed a great interest in this field, prompting him to study physiotherapy in Innsbruck after wrapping up his sports science degree. “After graduating last year, I was lucky enough to gain my first practical experience at our club. I am now self-employed and run my own practice with a colleague in St. Ulrich am Pillersee, where I work two days a week. Another two days I work at the hospital in St. Johann in Tyrol and I’m still active as a physio at the club. That’s why I’m now a bit careful not to hurt my team-mates too much with my style of play, because I’m not doing myself any favours. After all, they’ll end up on my treatment table. But then the trump cards are in my hand,” joked the defender.

The present and the future

After a mixed start to the season with many draws, it seemed as though the team literally flipped a switch in October as they put together a winning run. “The draws are of limited help to the team, but we weren’t inferior in any of the games and sometimes we were just lacking a bit of luck. Nonetheless, we know that we can compete at the top, which makes us optimistic for the coming season,” said the Tyrolean, who likes to spend his free time in the mountains and enjoys the peace and quiet away from the hustle and bustle of everyday life. But what does his footballing future hold in store? “As things stand, I will end my career with FC Pinzgau Saalfelden in a few years. But in football, you never know. One of my childhood dreams would certainly be to play in the second division again before I hang up my boots. And if that should happen, it will probably be here at my club, FC Pinzgau Saalfelden,” predicted a hopeful Mühlbacher.