Top of the Table Holiday Clash 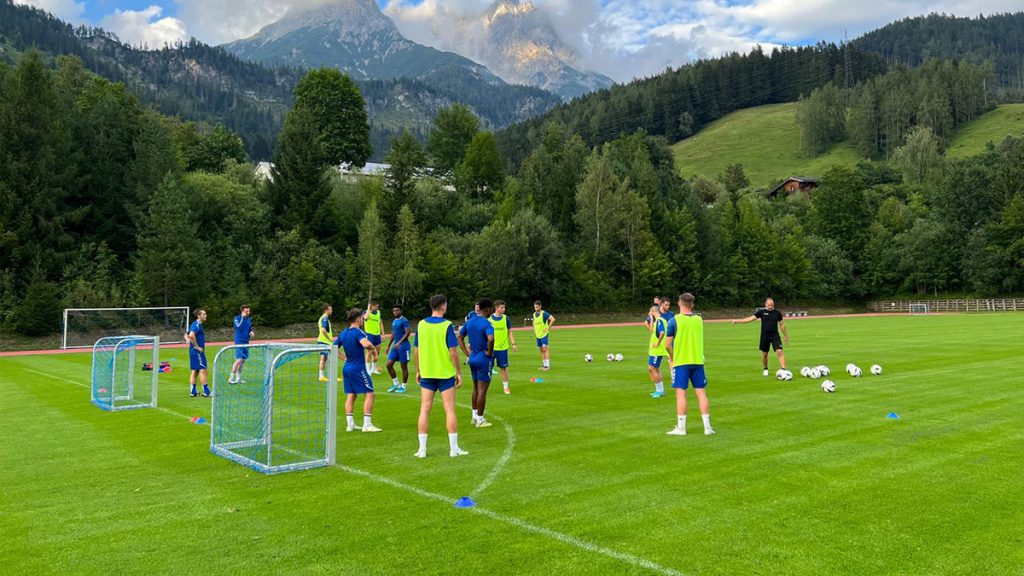 While the team of Alexander Schriebl is still undefeated after three completely played games and without conceding a goal, the Salzburgers had to settle for a happy draw in Anif last time. With a match in hand, they lead the table by one point ahead of the Pinzgauers. A top of the table match is therefore in the offing.

The original club was formed in 1933. It was subject to a takeover by the Red Bull company in 2005. They renamed the club FC Red Bull Salzburg, changed the team colours and claimed that it was a new team. As a concession to pleas to keep the old colours, Red Bull offered to allow the goalkeeper’s socks to be purple for away matches. This was viewed as an insult by fans caused a group of supporters, known as the “Violet-Whites”, to want to preserve the 72-year-old traditions of their club which they felt had been ignored by Red Bull.

In October 2005, the Violet-Whites successfully registered the old club’s original name “SV Austria Salzburg” and the old club emblem. For the second half of the 2005–06 season SV Austria fielded a unified team with the football section of the PSV Schwarz-Weiß Salzburg, which played in the 1. Salzburg Landesliga, the fourth tier of Austrian football, but at the end of the season the PSV members voted against continuing the link. Thus, the Violet-Whites formed a completely new team, which entered 2. Klasse Nord, the seventh tier of Austrian football, for the 2006–07 season.

Austria Salzburg have finished second in promotion position each of the last two seasons in Regionalliga Salzburg.

Alexander Schriebl will still have to do without several players with Alessandro Ziege (knee), Raphael Streitwieser (ankle), Ratan Dudaew (knee), Marcell Toth (ankle) while Marko Colic (knee) has made a quick recovery from his opening week injury, but not yet available for action.

“We are very satisfied with our start to the season so far. We have followed Austria very closely in the last rounds – from there we can assess our next opponent well. Austria positioned themselves clearly at the beginning of the season, so they are the clear favorites in every game. The pressure is not on us. We’ve been very stable so far and we’ll try to bring home something countable. Our opponents have hardly had any scoring chances in the first games of this season, and we want to continue that. If we can do that, we’re very optimistic that we’ll have another good game.”

Our last six matches have gone the way of the home side with three wins, two loses and one draw. Watch for the duel upfront as both Marco Hödl and Tamas Tandari have scored five goals this season thus far.